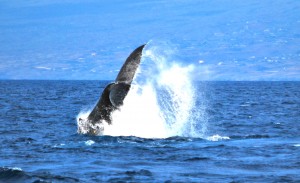 We hope you had as nice a weekend as we did! We started out our Aloha Friday with a sighting of 3 Humpbacks about a mile and a half outside of the harbor. At first we thought one of these whales was a calf…but as we approached we were pretty sure we were looking at Mom, her yearling and an escort. On Friday’s Whales and Cocktails Cruise from Anaeho’omalu Bay, we had to search a bit…but it paid off when we found a mom/baby pod. Baby breached 4 times just 400 yards from us. We also saw another big adult wave and slap his pectoral fin twice — this whale also performed two peduncle throws. On both of these cruises we were able to lower our hydrophone and make out some faint singing.
Saturday morning, guests on our Signature 10:00 Whale Watch got to see 6 different Humpbacks. The first two we saw were the most active…we couldn’t tell what was really going on with them, but we did get to see them approach each other “nose” to “nose” (well actually, rostrum to rostrum) on the surface, after which the whale on the left did a very, very small tail lob. Right after that, the whale on the right did a whole peduncle throw. We watched these two chase each other around for a good hour or so before they separated.
And on Sunday’s Wake up with the Whales, we saw 6 different Humpbacks…and on the Snorkel Adventure which departs just 30 minutes after the Whale Watch returns, we not only saw the same 6 whales (we know that because we were able to identify them by their size, location and fluke markings)…but we even got mugged by one juvenile whale.
But of course, Humpbacks can be seen from shore too…here’s the report I received on Sunday afternoon from one of our favorite OS retail crew, Delilah:

“Two whales were spotted today right in front of the Hilton Waikoloa Village resort traveling north. Two of them were splashing, tail flaps, and playing around. The guests (and some employees) at Lagoon Grill were so excited to see this spectacle, so they dropped their lunch and went to get a closer look…YAYYY!!! whales are here. so exciting”!

Mahalo,
Claire
Captain Claire’s Humpback Fact of the Day:  A fully grown Humpback Whale can hold his or her breath for around 45 minutes. Usually, that’s not what we observe in Hawaii though. We’re more likely to witness 10-20 minute breath hold dives, and if the whale is really active, s/he surfaces to breathe a lot more frequently.