We had great Humpback sightings all day on Thursday. On our 10:00 Signature Whale Watch from Kawaihae, we found a competitive pod of 4 whales — Mom and her baby, and two escorts competing to be just one escort. Mom did a good job of keeping her calf away from the two guys. She put her body between her calf and them…and we saw lots of lunging and a couple of peduncle throws from the competing males. According to Captain Baker, our Whales and Cocktails Cruise was “stellar”. It took us about 30 minutes to get out to three spouts we saw as we were leaving the bay.When we got to the whales, they acted VERY happy to see us. Mom, baby and escort spent 90 minutes right at our boat. If our arms were about 2 feet longer (and if it were legal), we could have touched them for most of the time! The whales were clearly looking at us from below the surface and above, spy hopping, and lifting their heads horizontally too. And it wasn’t just baby who was interested…the adults were right there with him. We saw a few peduncle throws from the escort and a few tail lobs too…We wondered what those whales must have been thinking, listening to all the shouts of excitement coming from that floating object in the middle of the ocean!
Have a great weekend…I’ll send out a recap of what we saw on Monday,
Mahalo,
Claire
Captain Claire’s Humpback Fact of the Day: Humpback Whales (and, in fact, all Baleen Whales) demonstrate something called “reverse sexual size dimorphism”. This means that an adult female Humpback is larger than an adult male (by about 5%). Though researchers are not sure of the exact reason for the difference in size, they theorize that the increased size allows the female to store more reserves to feed and care for her calf, and also to give birth to a bigger calf who might have a better chance of survival than a smaller one. Average length for a fully grown female Humpback is around 45 feet. At her heaviest, she weighs 35 – 40 tons.

Monday morning brought us calm winds (finally) but a pretty big swell. The whales didn’t seem to mind the water movement though, because we saw and heard a LOT without going very far from shore. On our Wake up with the Whales Cruise on Manu Iwa, we found ourselves surrounded frequently throughout the trip. Every direction we looked, we were seeing spouts and flukes. We got to see 4 different Mom/baby pods — none of them appeared to be accompanied by escorts, and a couple of different other adult humpbacks pec slapping and peduncle throwing. The whale song was really loud and clear when we dropped our hydrophone. If you’d like to hear a snippet, click here.The same thing happened to guests on Seasmoke’s Wake up with the Whales — surrounded by Mom’s and babies! That trip started with an additional treat though — guests got to see a huge pod of spinner dolphins who found the boat to be an object of fun. On our 10:00 Cruise on Alala, we got to watch a pod of  Mom/Baby/Escort for almost the whole cruise. They were pretty calm and quiet but the baby did try to approach us several times. At the end of the cruise, the baby woke up a bit, rolling around on the surface and slapping his pectoral fin just a bit. On our Whales and Cocktails Cruise, we got to see a spyhop in the beginning of the cruise, followed by a couple of very active breaching calves (we got to see their mom’s surface, but no signs of any escorts). We also got surprised when an adult humpback decided to breach about 400 yards away from us.
Captain Claire’s Humpback Fact of the Day: According to researchers, the sleep process for a Humpback is most likely very similar to how their little toothed cousins, the dolphins, sleep. EEG readings from sleeping bottlenose dolphins show that the dolphins shut down half their brains at a time to rest – a process called “uni-hemispheric slow wave sleep”.  Mallard ducks and some species of seals sleep this way too. The active half of the brain presumably is monitoring breathing and perhaps scanning the surroundings for predators, while the passive half is resting. Bottlenose dolphins sleep approximately 33% of the day, but stay asleep for only a couple of hours at a time.

Our Monday Wake up with the Whales Cruise started out with sightings of lots of whales in the distance, but as the saying goes, “it’s not over till it’s over”. Towards the end of our cruise we got to see two tail lobbers, some pectoral slapping and 5 breaches all within a couple hundred yards of the boat. Guests on the 10:00 Cruise from Kawaihae got to watch a competitive pod of 5 whales for most of the cruise. Though there were whales breaching and splashing everywhere, this group kept our attention. They were quiet at first, and then something spurred them to action and we got to see lots of peduncle throws from them. At one point, they dove under us, and surfaced within 100 feet. We got to see several spy hops within 50 feet of us. When we deployed the hydrophone we heard a symphony of singing too.
Claire
Captain Claire’s Humpback Fact of the Day: When you see the spout from a whale, you’re actually looking at an interesting combination of things. Some of what you’re looking at is condensation from the whales’ lungs (the same thing you’re looking at when you see your own breath after exhaling in a cold environment); some is atomized ocean water (Humpbacks live in a wet world, and there’s always some of the ocean pooled on top of their blow holes when they surface); and…since Humpbacks don’t have cilia in their respiratory tracks (little hairs)…a lot of what you see (and occasionally feel) is actually mucus! Yuck!
Aloha,
We had a great day on the water on Thursday. With five different cruises just for Whale Watching, plus a couple of Snorkel Cruises thrown in, there’s way too much to report for one email, so I’ll just give you a few highlights. Though the surf was up today, the wind was very, very calm, allowing us to see for miles. There were lots of Humpbacks visible all day long — on our Wake up With the Whales Cruises (we took both Seasmoke and Manu Iwa out), we all saw a few breaches and lots of great fluke dives. On our Kid’s Educational Whale Watch Cruise, the kids (and parents and teachers from Wai’aha International Family School) got to see 3 spy hops about 100 yards from the boat. We also saw a pretty big peduncle throw. On our Whales and Cocktails Cruise we had several close encounters with adult Humpbacks, and when we stopped the boat we could actually hear the whales singing through the hulls. After we were serenaded for several minutes, we decided to deploy the hydrophone and our close-by singer was certainly the star of the show. He was making some groaning, clicking, and squealing sounds that were new to us (along with the “whooop, whoop, whoooooop” sounds we were familiar with from last year. The best part was when the singing stopped briefly. We knew he was on the way up, and he surfaced just 50 yards from us!
Mahalo and have a great weekend. I’ll send out a recap on Monday.
Claire

Captain Claire’s Humpback Fact of the Day: Yesterday, I mentioned that researchers estimated a Humpback’s daily fish consumption during the summer season to be on the order of 2000 pounds per day. And if you do a quick Google search you’ll find that “fact” cited all over the place. Turns out that this may be just another example of how inaccurate information gets spread. Once a “fact” is listed in a book, it’s picked up on the internet and its spread can be exponential.

According to researcher Briana H. Witteveen and her colleagues who conducted a study to determine the effect of Humpback predation on fish abundance near Kodiak Alaska, based on the documented stomach contents of Humpbacks “processed” through whaling stations back in 1937, combined with estimates of actual suitable prey availability, an average size Humpback whale is eating more on the order of 800 pounds (or about 576,000 calories) of food each day.Does that seem like a lot of food to you?

We had a Kona storm roll in to the island on Friday, so we had to cancel a bunch of our cruises…but we did get to go out a couple of times, and we got to see some pretty fun stuff. On our Friday Wake-up With the Whales, guests on Manu Iwa spent the first hour or so watching 10 different whales in pods of two just spouting and diving. We did get a few great fluke shots. But towards the end of the cruise, we were “mugged” by a sub-adult! This guy came right up to the boat, spy-hopped on the starboard side and looked at all of us. We were going crazy! Then he slid below the surface, swam underneath us and spy-hopped on the port side looking at all of us again! On Friday’s 10:00 Whale Watch on Alala we saw spouts from 14 different Humpbacks. Most were in pods of two, but we did see a few solo whales. Everyone seemed to be very relaxed, just surfacing, taking 3 or 4 breaths and diving. Most of the whales were on 15-17 minute dive cycles.
By Sunday, the ocean had calmed down a little, but it was still sort of bumpy out there. On our 8:00 Wake-up with the Whales, we saw 6 different Humpbacks, mostly just breathing and diving. Same thing on our 10:00 Whale Watch — we saw 10-12 different whales and they were all just spouting and diving.But on our mid-day private Whale Watch we got to see some breaching about 75 yards from the boat.
Mahalo,
Claire
Captain Claire’s Humpback Fact of the Day: Spy hopping is one of the ways a Humpback can see what’s going on above the surface of the water. Because Humpbacks have really big heads proportionally, their eyes are about a third of the way down their bodies. When the whale spy hops, she rises slowly and vertically from the water, head first. If she’s a fully grown whale, the tip of her rostrum may be 15 feet above the surface before her eyes get there! 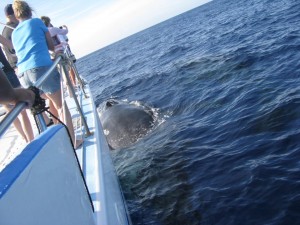