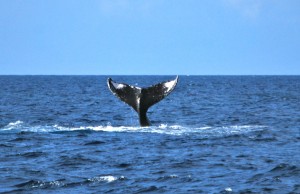 This just in…today (Tuesday, 11/4), guests aboard our Dolphin Watch Adventure Cruise on Manu Iwa got to see the first Humpbacks of the season off the Kohala Coast!
Captain Will reports that at 8:30 am, just as the cruise was departing from Anaeho’omalu Bay, his crew (Captain Ryan) saw two flukes about 1/2 mile off shore.
Captain Will headed the boat out to sea, and 17 1/2 minutes after Ryan observed the dive, the 2 Humpbacks surfaced and spent almost a minute with us, swimming about 120 yards from our boat!
According to Captain Will, lots of guests had cameras with BIG lenses…and got some good photos of the whales. When we get the pictures, we’ll post them on our Facebook page.
We’ll begin running our official Whale Watch Cruises on December 1. But until then, join us on any of our catamaran cruises and you may be lucky enough to welcome those early arrivers to our coastline!
It’s official…the 2014/2015 Humpback Whale Season has begun!!