We had great Humpback sightings all day on Thursday. On our 10:00 Signature Whale Watch from Kawaihae, we found a competitive pod of 4 whales — Mom and her baby, and two escorts competing to be just one escort. Mom did a good job of keeping her calf away from the two guys. She put her body between her calf and them…and we saw lots of lunging and a couple of peduncle throws from the competing males. According to Captain Baker, our Whales and Cocktails Cruise was “stellar”. It took us about 30 minutes to get out to three spouts we saw as we were leaving the bay.When we got to the whales, they acted VERY happy to see us. Mom, baby and escort spent 90 minutes right at our boat. If our arms were about 2 feet longer (and if it were legal), we could have touched them for most of the time! The whales were clearly looking at us from below the surface and above, spy hopping, and lifting their heads horizontally too. And it wasn’t just baby who was interested…the adults were right there with him. We saw a few peduncle throws from the escort and a few tail lobs too…We wondered what those whales must have been thinking, listening to all the shouts of excitement coming from that floating object in the middle of the ocean!
Have a great weekend…I’ll send out a recap of what we saw on Monday,
Mahalo,
Claire
Captain Claire’s Humpback Fact of the Day: Humpback Whales (and, in fact, all Baleen Whales) demonstrate something called “reverse sexual size dimorphism”. This means that an adult female Humpback is larger than an adult male (by about 5%). Though researchers are not sure of the exact reason for the difference in size, they theorize that the increased size allows the female to store more reserves to feed and care for her calf, and also to give birth to a bigger calf who might have a better chance of survival than a smaller one. Average length for a fully grown female Humpback is around 45 feet. At her heaviest, she weighs 35 – 40 tons.

We took out two boats for our Wake up with the Whales Cruise on Thursday. Guests aboard Seasmoke found ourselves the object of attention for our favorite pod — Mom and Baby. These two whales stayed with us for over an hour, diving and surfacing right next to the boat, We wore ourselves out running from bow to stern, port to starboard, watching the whales as they watched us. We loved seeing them right below the surface of the water  – their white pec fins glowing with that incredible turquoise color as they reflected through the water, and we loved looking into their eyes when they surfaced. Watching baby sit on Mom’s rostrum was a real treat too! When we were able to take our eyes away from them, we also saw tail lobs and breaches all around us from other whales.
And though Manu Iwa departed from the same location at the same time, guests aboard that boat had a slightly different experience – an experience that can be summed up in just one word, “Breach”! A pod of Mom and baby found the boat quickly and baby breached so many times that we all lost count. Then we saw a sub-adult breach right next to us…then we saw a fully grown adult Humpback breach right next to us!
On the 10:00 Signature Whale Watch Cruise from Kawaihae we were astounded by the absence of activity. Though we did see a Humpback surface several times, and some of us saw a breach, it really wasn’t the experience we want to give our guests so Captain Kino called it a “Fluke” and we invited our guests to join us again on another cruise for free. So…did the Humpbacks move away from the area because of the tiger shark that had been seen at Hapuna Beach? Did the low flying helicopters that were out looking for the shark alter the behavior of the Humpbacks? We don’t know for sure, but it’s only the third week of March, so we know there are still lots of Humpbacks visiting the area.
Have a great weekend – I’ll send out my next report on Monday,
Claire
Captain Claire’s Humpback Fact of the Day: Researchers taking DNA samples from the whales take pencil eraser sized plugs of skin and blubber by using a dart tip on the end of an arrow propelled by an air-rifle or crossbow. Tissue samples are used to ascertain a wide variety of information including sex, age, hormone levels, dietary composition, stress levels, contaminant levels, and the presence of viral or bacterial diseases among other things.

Our weekend started out really fun — with Mom Humpback and her very playful calf. We 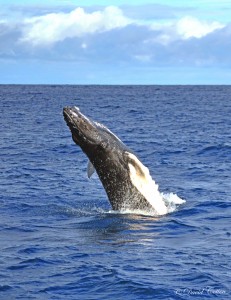 Baby Breaches!
Mahalo to guest David Cotton for sharing this incredible photo from the March 6th Wake up With the Whales Cruise

found this duo just outside of Anaeho’omalu Bay on Friday’s Wake up with the Whales Cruise, and paralleled them for an hour and a half as they traveled north to Honoko’opae Bay (between the Hilton and the Mauna Lani). Baby was very interested in us, swimming around us and under us, and even breaching 5 or 6 times right next to the boat. We never did see Mom breach, but she let her baby explore us to his little heart’s content.

On Saturday’s 10:00 Cruise from Kawaihae, we also spent lots of time with a very active calf. Baby tail lobbed repetitively, and mom breached right near the boat. By our 3:00 Whales and Cocktails Cruise, the seas had come up a bit and though we were seeing a lot of different spouts, it was more difficult to get to them. Captain Mark found a competitive pod of 5 whales though, and we got to parallel them for quite awhile watching lots of lunges and shoving around. We heard lots of trumpeting from these guys, and a few times, saw their inflated throats as they lifted their heads.
On Sunday’s Whales and Cocktails, we started out with sightings of just the occasional spout and all these whales were pretty far away. Then we noticed 3 spouts together, and headed over to see Mom, baby and escort. We put the boat in idle when we were about 150 yards away from them to see what would happen. Baby decided to come over for a closer look, followed by Mom of course, and the escort. Baby breached multiple times just 10 feet from the boat, and Mom and the escort surfaced right next to us too. We got to see all three multiple times just below the surface on all sides of the boat, and at the surface too. Those three wore out all of us who were onboard as we went from bow to stern and port to starboard following them on the surface. On the way back to the bay we saw another Mom and her baby. They were accompanied by a couple of escorts…but unfortunately, we didn’t have time to stop to watch them.
Mahalo,
Claire
​
Captain Claire’s Humpback Fact of the Day: Before whaling was banned internationally, Humpback whales’ livers were processed for their oil, which contained a lot of vitamin A. A fully grown Humpback has a liver that weighs between 800 and 1400 pounds.

Tuesday was another 9 Whale Watch Cruise day for us. Highlights included watching a competitive pod of 5 whales from the Alala from 8:15 till 9:45. We found this pod off of Spencer Beach, and paralleled them as they swam north. We saw lots of head lunges, and lots of jaw claps. We also saw 6 pectoral slaps from the whale in the front of the pack, and lots of head butting from the whales behind. At one point, we saw the lead whale peduncle throw on top of one of the followers. And when we stopped the boat and deployed the hydrophone, the sounds we heard were so loud they almost shook the boat. On the next cruise, the competitive pod was no where to be found, but we did see lots of pods of two…and one pod of two came to see us for more than 20 minutes, surfacing right next to us, and diving right underneath us. Guests aboard Seasmoke and Manu Iwa departing from Anaeho’omalu Bay also got some great sightings with a couple of close encounters. Each cruise reports seeing 15 – 20 different whales, most in pods of two, but there were several competitive pods of 5 and 6 whales too.
Mahalo,
Claire
Captain Claire’s Humpback Fact of the Day: Humpbacks produce sounds in frequencies ranging from 10 hz to 24 khz. A healthy young adult human can generally hear sounds in frequencies between the ranges of 20 hz to 20 khz.

We hope you had as nice a weekend as we did! We started out our Aloha Friday with a sighting of 3 Humpbacks about a mile and a half outside of the harbor. At first we thought one of these whales was a calf…but as we approached we were pretty sure we were looking at Mom, her yearling and an escort. On Friday’s Whales and Cocktails Cruise from Anaeho’omalu Bay, we had to search a bit…but it paid off when we found a mom/baby pod. Baby breached 4 times just 400 yards from us. We also saw another big adult wave and slap his pectoral fin twice — this whale also performed two peduncle throws. On both of these cruises we were able to lower our hydrophone and make out some faint singing.
Saturday morning, guests on our Signature 10:00 Whale Watch got to see 6 different Humpbacks. The first two we saw were the most active…we couldn’t tell what was really going on with them, but we did get to see them approach each other “nose” to “nose” (well actually, rostrum to rostrum) on the surface, after which the whale on the left did a very, very small tail lob. Right after that, the whale on the right did a whole peduncle throw. We watched these two chase each other around for a good hour or so before they separated.
And on Sunday’s Wake up with the Whales, we saw 6 different Humpbacks…and on the Snorkel Adventure which departs just 30 minutes after the Whale Watch returns, we not only saw the same 6 whales (we know that because we were able to identify them by their size, location and fluke markings)…but we even got mugged by one juvenile whale.
But of course, Humpbacks can be seen from shore too…here’s the report I received on Sunday afternoon from one of our favorite OS retail crew, Delilah:

“Two whales were spotted today right in front of the Hilton Waikoloa Village resort traveling north. Two of them were splashing, tail flaps, and playing around. The guests (and some employees) at Lagoon Grill were so excited to see this spectacle, so they dropped their lunch and went to get a closer look…YAYYY!!! whales are here. so exciting”!

Mahalo,
Claire
Captain Claire’s Humpback Fact of the Day:  A fully grown Humpback Whale can hold his or her breath for around 45 minutes. Usually, that’s not what we observe in Hawaii though. We’re more likely to witness 10-20 minute breath hold dives, and if the whale is really active, s/he surfaces to breathe a lot more frequently.